Using css preprocessor you can start using things like variables, mixins, and functions. It will allow you to start reusing properties and patterns over and over, after defining them just once. So here are 10 best libraries for preprocessing CSS files that will make your code easier to maintain and save your time.

Less is a CSS pre-processor, meaning that it extends the CSS language, adding features that allow variables, mixins, functions and many other techniques that allow you to make CSS that is more maintainable, themable and extendable.

Stylus is a revolutionary new language, providing an efficient, dynamic, and expressive way to generate CSS. Supporting both an indented syntax and regular CSS style.

Myth is a preprocessor that lets you write pure CSS without having to worry about slow browser support, or even slow spec approval. It’s like a CSS polyfill.

The main purpose of stylecow is support modern CSS in all browsers. Stylecow transform your code to be compatible with all browsers adding vendor prefixes, fixing issues, generating polyfills, etc.

Yet Another CSS Preprocessor. 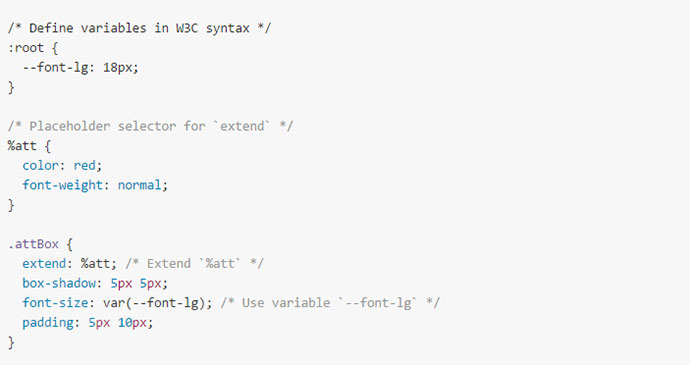 GCSS is a pure Go CSS preprocessor. This is inspired by Sass and Stylus.

Javascript based preprocessor. No new language, no new syntax. Write everything in plain JavaScript.

PostCSS is a tool for transforming CSS with JS plugins. These plugins can support variables and mixins, transpile future CSS syntax, inline images, and more.

CSS-Crush is a standards inspired preprocessor designed to enable a modern and uncluttered CSS workflow.