Are you looking for a solution to show list of article as featured news, lastest news or something else in the most catching eyes and the most attractively? So here are 9 jQuery Vertical & Horizontal News Ticker Plugins for you. Enjoy !

Breaking News is a simple jQuery plugin to get feeds from an user provided feed URL and display them sequentially like a news ticker.

Taking inspiration from the BBC News website ticker, jQuery News Ticker brings a lightweight and easy to use news ticker to jQuery.

jNewsticker is a powerful jQuery plugin designed to seamlessly integrate into your website. Pre-packed with three news ticker styles and three skins, you can easily create your own skins.

Totem is a jQuery plugin that lets you create an animated vertical ticker. Includes controls to advance, reverse, stop and start the animation. Totem is an efficient and clean way to showcase content such as a news feed or even social media feed from a site like Twitter. 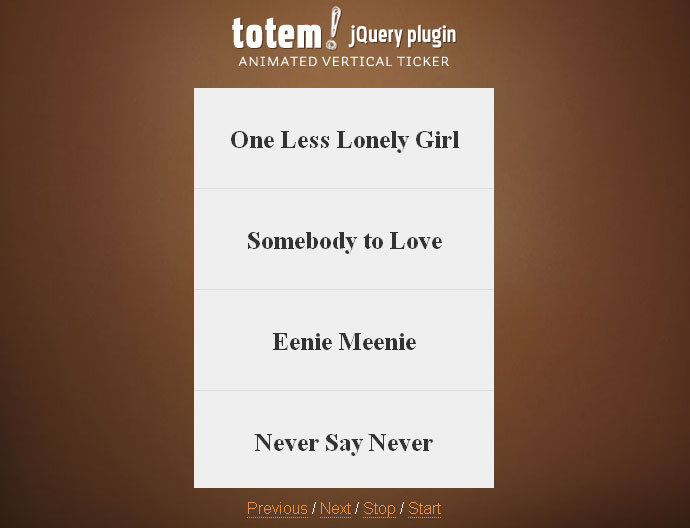 Sequentially iterates though items in an unordered list, showing the current one and hiding the previous one. If you the mouse is currently over the ticker, it will not change to the next item in the list.

As we abused the Internet back in the 90 with tags like blink and marquee the last 10 years have seen the gradual extinction of these proprietary tags until we did full circle and the marquee effect appears in CSS 3. There’s actually a very strong business case and requirement for the marquee tag – since the only the alternative is often a hacky solution (I feel) that shifts the CSS left position which, depending on your browser, will begin to eat away at your CPU.

The jQuery Marquee plug-in converts a list element into an ESPN-style scrolling marquee. Messages are scrolled in from top or bottom (based on the yScroll option) and longer messages will then ticker to the left in order to show the full message.

NewsTicker is a little plugin which allows you to create a scrolling news ticker.